Heat resistance is a primary consideration that should be made before purchasing plastics. For some applications, heat resistance is more important – may be the plastic will be stored in an autoclave, or may commonly interact with flames. If a plastic melts or has its structural integrity compromised by heat, it can spell disaster – so, engineers are wise to choose plastics that are designed to endure extreme heat.

When seeking plastic sheets, rods, or tubes that exceed the performance of commodity plastics, a few varieties stand out specifically for their ability to tolerate extreme heat. Read on to find the top seven plastics for environments that require a material with high-temperature resistance. 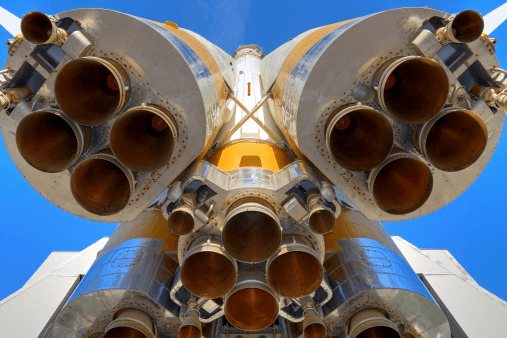 Polyphenylene sulfide, often shortened to PPS, is a high-performance thermoplastic that can be molded, extruded, and machined into tight tolerances. It was first commercially produced in 1983 and has since been used to create strong synthetic fibers and textiles that strongly resist both chemicals and heat. These fibers can be found in applications such as coal boilers, electrical insulation, film capacitors, fuel and brake systems, heat shields, and more. You’ll know if a plastic sheet is PPS if it makes a metallic sound when struck!

PPS has a maximum service temperature of 424°F (218°C), and will not dissolve in any solvent if ambient temperatures are below 392°F (200°C). Additionally, it can be heated to 536°F (280°C) without even beginning to melt. While PPS is known for resisting heat, it also passes the UL94V-0 standard without the addition of flame retardant materials.

PSU is tough and stable at high temperatures, and actually shares a lot of the same traits as polycarbonate plastic. If polycarbonate’s high strength falls short, polysulfone is often the next alternative that engineers investigate. It has one of the highest service temperatures among all melt-processable thermoplastics, combined with high-temperature resistance and inherent flame retardance.

These fundamental traits make PSU used for specialty applications, like electrical equipment, vehicle construction, and medical technology due to its ability to withstand autoclaves. Its melting point is over 932° F (500°C), which makes it extremely difficult to melt, but also very difficult to intentionally process with heat. It will maintain all of its impact resistance between -212°F (100°C) and 203°F (150°C), and gradually weakens outside of this range.

Ultem is a semi-transparent, high strength plastic that’s ideal for high service temperature environments. Although its melting point is extremely high at 426°F (219°C), its biggest benefit is that it has the highest dielectric strength of any thermoplastic material. Combined with a maximum continuous service temp of 338°F (170°C), this plastic is ideal for circuit boards, high-temperature lighting, engine components, and bed materials for 3D printers.

Ultem is closely related to PEEK, another powerful plastic that will be described later in this post. It shares many of the same strengths but with a slightly lower impact strength and usable temperature. However, Ultem is less expensive than PEEK, making it ideal for situations that require cost efficiency over the highest standard of durability.

Polytetrafluoroethylene, also known as PTFE and Teflon, is a widely used plastic that was discovered in 1938 by the company Chemours. It has one of the highest melting points out of any plastic, 620°F (327°C), but it maintains its strength at temperatures as low as -450°F (-268°C). While this makes it extremely useful for certain applications, it also makes it quite expensive to process due to high temperatures. In fact, Teflon doesn’t even flow when it melts – it becomes a gel since there is no crystalline phase.

This plastic has found a wide range of uses. It’s often used as a non-stick coating for pans and cookware, as it bonds strongly to the pan and can tolerate a stovetop’s heat. It’s also used in containers and pipes for corrosive chemicals – it was even used during the Manhattan Project to coat valves and seals that contained uranium!

Vespel is a high-performance polymer that is popular for use in industrial machinery, vehicles, and aerospace technology. It’s extremely heat resistant, with no melting point. Vespel can withstand continuous heating up to 442° F (228°C), repeated heating up to 572°F (300°C), and even tolerate temperatures as high as 899.6°F (482°C) without losing significant integrity. The integrity is only lost due to a process called outgassing, where particles of gas inside the Vespel, particularly oxygen, escape the material. In addition to extreme heat resistance, Vespel also can tolerate temperatures as low as -240°C without becoming brittle.

Torlon, also known as polyamide-imide, is one of the top-performing thermoplastics available. It’s renowned as an effective alternative to metal in high temperature and high wear applications. As a result, it’s commonly used to manufacture aerospace, propulsion, and automotive components. It resists creep and chemicals such as strong acids, making it ideal for use in severe environments.

Temperature-wise, Torlon has formidable heat resistance, suiting it for certain high temperature settings. Not only does Torlon have a low coefficient of thermal expansion, but it can also be continuously heated to 260°C, and occasionally be heated up to 527°F (275°C). Torlon is also flame-resistant, extinguishing any flames on it within ten minutes. While Torlon has great heat and flame resistance, it will also not become brittle in temperatures as low as -238°F (-150°C).

PEEK, short for Polyetheretherketone is a thermoplastic with strong mechanical and thermal properties. It is commonly used in harsh environments as an alternative or replacement for metal since it offers excellent strength, rigidity, and toughness, regardless of temperature. As a result, PEEK is used in applications such as bearings, pumps, medical devices, and aerospace components.

For each individual situation, a different engineering plastic will be ideal. While an engineer may need a heat resistant plastic for a high-heat application, they scarcely only have one consideration in mind. Certain physical properties, chemical resistance, or expense constraints may make one type of plastic preferable for certain use cases. For this reason, it’s important to evaluate all of your heat-resistant plastic options. To take a look at our engineering plastics product page, click here. Or, contact us to speak to an expert today.