Polystyrene and polyethylene are some of the most commonly used polymers today. Both are impact resistant, lightweight, and available in many different forms, making them ideal for a wide variety of uses. With so many uses for both kinds of plastics, it’s easy to become confused about how to best utilize these products – however, these plastics have key differences that must be considered.

Let’s take a closer look at the properties of both polyethylene and polystyrene, and identify what makes these two thermoplastics unique:

Polyethylene was first synthesized by scientists Reginald Gibson and Eric Fawcett in 1933 when they reacted ethylene with benzaldehyde under extreme heat and pressure. The resulting polymer could be formed into sheets and rods, or drawn into fibers and films. This versatility was one of the defining traits of polyethylene. Today, polyethylene is commonly manufactured in several different forms with vastly different properties: 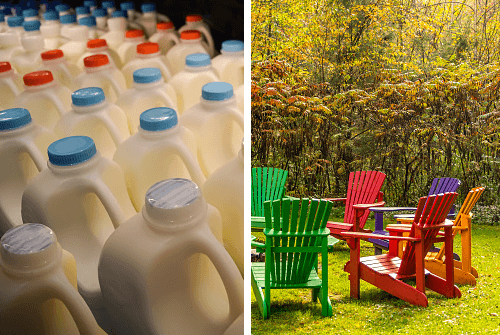 Polyethylene is the most chemically simple polymer, comprised of nothing but carbon and hydrogen. Due to its molecular makeup, it’s highly resistant to chemicals, UV light, and moisture. As a thermoplastic, it can constantly be melted, reformed, and cooled into new shapes again and again, making it a great candidate for recycling. Polyethylene is also quite durable, making some of its forms popular for packaging heavy items, and other forms ideal for sheer impact resistance.

Polyethylene is known for being exceptionally lightweight for its strength. It also endures contact with many different chemicals, meaning that most household cleaners can be used on polyethylene without causing significant damage. In addition to this, polyethylene can easily be fashioned into many different forms, including sheets, rods, and blocks, as well as custom shapes. If needed, it’s easy to cut and fabricate most types of polyethylene with basic woodworking tools.

Polyethylene has many different use cases due to its versatility. It’s also exceptionally popular for packaging food and drinks as most types of polyethylene are considered food safe by the FDA.

Polystyrene, often colloquially referred to as “styrene,” is a polymer that’s created from the monomer styrene, which is a liquid hydrocarbon that’s derived from petroleum. Polystyrene has an exceptionally long history, being discovered in 1839 by an apothecary named Eduard Simon. He distilled oils from the American sweetgum tree, and called the resulting compound styrol oxide. However, it wasn’t until 1938 that scientists devised how to commercially manufacture this compound – once the discovery was made, styrol oxide was renamed to polystyrene.
Polystyrene is available in three primary forms, including a hard, impact-resistant plastic, a lightweight foam, and a thin film. This gives polystyrene almost the same amount of versatility as polyethylene.

Polystyrene is a thermoplastic that’s solid at room temperature but will begin to melt at 210 C. Once melted, polystyrene can be reshaped into new forms, then cooled until solid – making it a great candidate for recycling. All forms of polystyrene are somewhat resistant to acids and bases, making them reliable for day-to-day usage.

The foam variety of polystyrene is often referred to as Styrofoam. This foam is rigid but able to absorb and disperse significant pressure due to its structural strength and low density. Despite being expanded with air bubbles, polystyrene foam still retains its moisture resistant and thermally insulating properties – which is why hot drinks are often served in polystyrene cups.

Polystyrene is one of the most cost-effective plastics available for purchase. It’s also very simple to cut into shape using either computer-guided cutting, two-dimensional shaping, or household tools like knives and table saws. This is one of the reasons why engineers commonly use polystyrene, especially in foam form, to create prototypes – all forms of styrene can be purchased, glued, sanded, cut, and painted very easily. As well, polystyrene can be recycled if it is disposed of properly.

Polystyrene has a wide variety of use cases, whether it’s in a hard plastic, foam, or film form. The hard plastic is often used for outdoor furniture, test tubes, glasses, toys, computer housings, utensils, and plastic drinking cups. The expanded foam variety to polystyrene is used in packaging, to-go containers, engineering models, and Styrofoam drinking cups. When stretched into a film, polystyrene is often used in vacuum-formed packaging as an inexpensive alternative to polypropylene.

While polystyrene and polyethylene share a few similarities, they have a few defining differences. In its HDPE and UHME forms, polyethylene is far more impact resistant and durable, making it ideal for use in construction. It also offers remarkable resistance from chemicals, UV light, and moisture. Polyethylene is remarkably dense and available in sheets, film, and fibrous forms.

On the other hand, polystyrene is available in sheet, film, and foam forms. However, polystyrene can be very easily shaped and formed, especially when it is in a foam form. This makes it ideal for engineering purposes. Polystyrene’s low price and ability to withstand temperatures over 200 celsius also makes it exceptionally popular within the foodservice industry.

If you’d like to take a closer look at the available forms of polystyrene, visit our styrene product page. To learn more about the many forms of polyethylene, visit our page for PET, PET-G, HDPE, or UHMW. Or, if you have additional questions, contact us today.